On May 16th, The Golfer’s Journey series featuring Jimmie James continued on to Sleepy Hollow Country Club located in Briarcliff Manor, New York. This course is a recent addition to Golf Digest’s 100 Greatest Courses in America.

To remain current in having played all the courses on the list, James is playing this and the other three courses added to the list this year. James was accompanied by Mac Benson an ESPN writer, and a New York Times Best Selling author Tom Coyne, who is working on “A Course Called America” and two others that will be apart of this series.

This course is regarded for its beauty and history as one of New York’s most elaborate country clubs. The European influences are prevalent in its architecture of the manor, clubhouse, garden, and even front gate. The expansive nature and the farm-like views along the Hudson River stood out most to James during his morning round.

Before Sleepy Hollow Country Club was founded in 1911, it started as a private residence named Woodlea. In 1911 the Country Club added a 9 hole golf course which was designed by Charles Blair Macdonald. A.W. Tillinghast would later expand the course to 27 holes in 1928.

In 2017, Gil Hanse would put his touch on restoring the original 27-holes while keeping its character. The expansive nature of the club stood out to Jimmie during his round.

One of the reasons that golfers’ love the opportunity to play here is because of the clubhouse and Country Club amenities. Some of the features for the Clubhouse are:

The Country Club itself has a multitude of activities for its members such as Tennis & Squash, Pool Facilities, Horseback riding, and Skeet & Shooting lodges. When playing at Sleepy Hollow, invited guests are in awe of its beauty, architecture, and accommodations. Even James himself was impressed with the “manor looking clubhouse and the farm like views along the Hudson River.”

Often regarded as the most picturesque hole in New York, Sleepy Hollow’s hole 16 captures the scene of the Hudson River, surrounding trees, and mountains in the distance. The bunkers encircle the green which gives it a plateau effect. This par three hole is certainly one of golf’s best. Jimmie said this about the hole,

Memorable Shot: “I caught my tee shot a little fat on the 150-yard par three 10th hole with a water carry from the tee to the green.  I said, “that’s going to be short and drop in the water.” The ball hit one the stones that frame the front right portion of the green, bounced up landed on the right to the right of the pin before rolling into the fringe with about a foot between it and the water, leaving a fifteen-foot putt.  I made the putt for an improbable birdie.”

Favorite Hole: “The par three sixteenth hole. It is one of the most photographed holes in golf. The large almost square green is bordered by a narrow bunker and encircles it has the Hudson River in the back-drop and low mountains or hills across the river.”

Clubhouse Experience: “The large clubhouse atop an elevated part of the property reminded me of an English manor.” 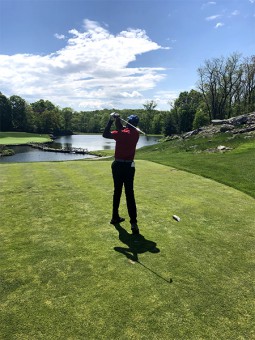 Sleepy Hollow’s rich history and breathtaking views are the reasons why golfers regard it as one best course(s) to play.

From the clubhouse to the fairway, playing here is an incredible experience.

It really does offer golfers truly unique and splendid views. Stay tuned for the next Golfer’s Journey with Jimmie James.