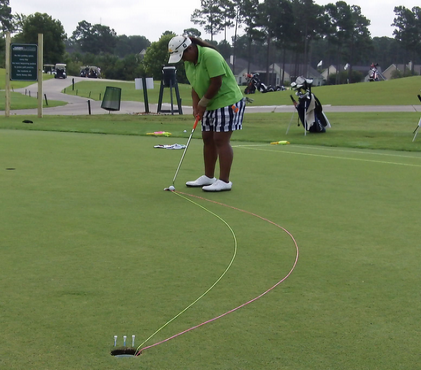 When it comes to putting, distance control is far more important than aim. After all, the amount that a putt will break depends on how fast the ball is rolling.

A lot of players are under the impression that in order to sink a putt you have to achieve a perfect combination of both speed and direction, but this isn’t necessarily true, and if you continue reading you’ll find out why.

First things first, if your putt doesn’t make it to the hole, it’s impossible for it to go in. It doesn’t matter how perfectly you read the break, if you don’t hit it hard enough, you’re not going to make anything.

On sloping putts, many golfers think that if they hit it hard and take out the break there’s a better chance of it going in. This generally holds true for putts inside of 3 or 4 feet but on longer putts, the odds of making it are pretty slim. It’s also risky to hit it hard because if you do miss you won’t have a tap in coming back. Basically, when you hit a putt that has too much speed, it won’t go in unless you hit the dead center of the cup.

Obviously, if you hit a putt with less speed you have to play more break. However, a putt with less speed can still drop even if it catches the edge of the cup (otherwise known as a lip-in). So if you correctly gauge the speed of a putt, the range of lines that your putt can travel on and still go in the hole will increase and you won’t have to be quite as precise.

So now the most important question: How hard do you want to hit your putts? And the answer is very simple; about 1 to 2 feet past the hole.

In a perfect world, every putt would drop into the hole on its last rotation but no ones perfect and if you make a habit of trying to do this, you’re going to end up with a lot of putts stopping short. So next time you have a putt of considerable length, try to visualize how hard you need to hit the ball in order for it to stop just past the hole.

You can practice by putting at something other than a hole. Put an object down on a flat part of the green and try to focus on getting your ball to stop just after it rolls by. By thinking about something other than your ball dropping into the bottom of the cup, you’ll be able to focus more controlling your distance and if you can master that, you’ll make more putts. And the ones that you don’t make won’t end up too far from the cup.