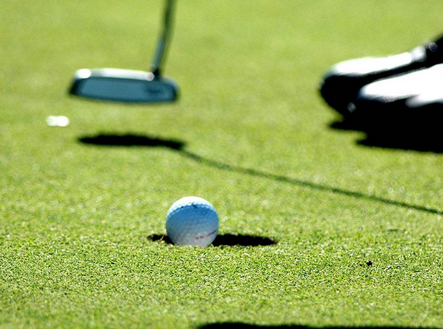 Putting should be the easiest part of the game, right?

There aren’t any hazards to watch out for, the wind doesn’t really affect the ball, you don’t have to worry about topping your shot or hitting it fat, it should be pretty straightforward. But it’s not.

Putting is without a doubt the most important and the most difficult part of the game. It’s what separates us from the pros and if you want to shave strokes off your score, the easiest way to do it is to leave your bag at home, take your putter and spend some time on the practice green.

You can use some of the tips below to get you started.

Have Light Hands – There’s nothing more detrimental to a putting stroke than tense muscles. When you tighten up, you lose feel, and when you lose feel you can’t control the distance of your putts.

Your putting stroke should be a pendulum and your hands should simply be what connects the club to the body. You don’t want to hit putts by flipping your wrists, you want to hit them by rocking your shoulders.

Grip the putter like you’d hold an egg. Not hard enough to make it crack but not light enough to let it slip out of your hands.

Not lifting your head after you hit your putt is a very simple but very difficult thing to do. Many amateurs have a tendency to immediately watch their ball as it leaves the face of their putter and the result is a very poor stroke.

Whether it’s a 30-footer or a 3-footer, try to keep your head down until the putt is well on its way to the hole. You’ll be amazed at how many more end up going in.

Next time you’re standing over a rather lengthy putt, don’t focus on the hole. See the line you think your ball needs to be on to go in the hole and then pick a spot on that line a couple inches in front of your ball. If your ball doesn’t go in, at least you know you hit the putt where you wanted it to go.

A famous player once said, “I don’t try to make putts, I simply try to roll the ball over my target and the hole gets in the way”.