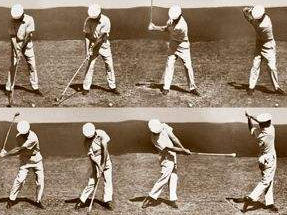 Everyone’s swing is different, even at the professional level. The swings of Jim Furyk, Bubba Watson and Tommy Gainey might not look quite as pretty as players like Rory, Tiger or Freddy Couples but there is one thing that they all have in common, great tempo (or rhythm). And the sooner you’re able to improve yours, the more consistent your ball striking will become.

It’s important to realize that tempo has nothing to do with speed. When most golfers are told to work on their rhythm, they immediately think they have to slow down there swing, and this isn’t always the case. For instance, look at the swing of Ricky Fowler. Start to finish, he probably has one of the quickest swings on tour but his tempo is near perfect.

On the other hand, you have a guy like Ernie Els, who is at the opposite end of the spectrum. For years, he hit the ball as far as anyone on tour and he did with a slow, rhythmic swing that looked effortless.

In very simple terms, having good tempo is about being smooth and staying balanced. Many times we try to swing harder for some added distance but the result all too often is a poorly struck shot.  Below are some quick drills you can do to help you develop a more rhythmic golf swing.

Broom or Rake Drill – Next time your home or on the course, grab a broom or a rake. You can use anything but make sure you find something that’s longer than your driver and rather heavy on one end. As simple as it sounds, just take the broom and start making some normal swings (maybe 20 or 30 swings). The added weight will help eliminate the the tendency to get quick as you transition from the backswing to the downswing.

Stop at the Top of Your Swing – This drill can be done on the range and it probably will take some time getting used to but in the end it will pay off. Next time your beating balls, take your normal stance and start your swing. Once you get to the top of your backswing, pause and hold your position for 2 to 3 seconds and then start your downswing. At first you’ll probably have some trouble hitting the ball but as you do it more and more you’ll notice that your swing will get smoother and your ball striking will improve drastically.

Takeaway Drill – All you need for this drill is two golf balls. Put one on the ground like you’re going to hit it and then put the second one about an inch or two behind it so they stand in a line toward your target. Then set up normally and place your club in between the two balls. Start your takeaway and allow the back of your club to push the second ball backwards. If the ball pops up in the air or rolls back more than a foot or two, you’re too violent in your takeaway. Ideally, you want the ball to roll smoothly across the ground for about 12 to 18 inches. Repeat the drill until you can comfortably achieve this. Then start hitting some balls.