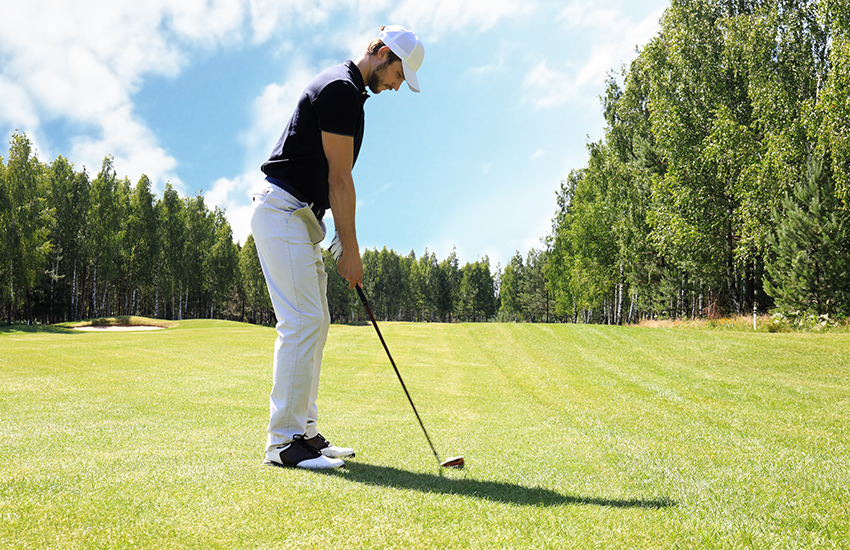 Controlling your ball flight is the key to good iron play, and if you ever want to be able to play well in the wind, you need to learn how to hit the ball relatively low.

Sometimes referred to as punch shots, these low driving bullets cut through the wind and roll forever, and though they might seem like a difficult shot to pull off, all they require is a little bit of practice.

The biggest mistake many golfers make when hitting a shot into the wind is swinging too hard. When you swing hard, you put more spin on the ball and the more spin your ball has on it, the more it will rise up into the air. Instead of taking a massive cut, take an extra club and swing easy. You’re ball will have less spin and more distance.

Step 2 – Play the Ball Back in Your Stance

There’s more than one way to hit a low trajectory shot but the easiest method is to start by playing the ball back in your stance. The lower you want it to go, the farther back you play it. Many of the best ball strikers in the world suggest narrowing your stance a bit when trying to hit a punch shot but it’s not absolutely necessary.

It’s virtually impossible to keep a ball low to the ground if you take a full swing. By making a short backswing, your wrists won’t fully hinge and you won’t hit down on the ball so much.

Step 4 – Keep Your Hands Ahead of the Clubhead

If you want to have one swing thought when hitting a low punch shot, it’s to keep your hands as far ahead of the clubhead for as long as possible. By keeping your hands well ahead of the ball at impact, you’ll effectively de-loft the club, thus lowering the probability that your ball with shoot up into the air. The image above is a good example of where your hands should be at impact.

Having an abbreviated follow-through is a product of trying to keep your hands ahead of the clubhead throughout the downswing and if you perform Step 4 correctly, Step 5 will happen naturally. It’s important to not stop (or slow down) your swing when hitting this shot.

Like any golf shot, acceleration through the ball will happen, your club just won’t release like it normally does with a punch shot. If you do find that a lot of your shots are chunked or hit poorly, you’re probably decelerating. To prevent this, try to keep your torso rotating through the entire shot.