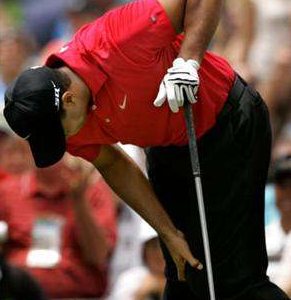 Though golf isn’t quite as physically demanding as sports like football or basketball, it does require players to put their bodies in a lot of unusual and straining positions. Professional golfers are some of the most flexible athletes on the planet and yet week in and week out, they’re constantly battling injuries.

Unfortunately, were not any different. Whether you’re out on the course once or twice a week, or you’re pounding buckets of balls on the range everyday, your body is eventually going to feel the effects, and though you may think that all aches and pains are a sign of something bad, this isn’t always the case. Read about some of the most common golfing injuries below so you know which ones are normal and which ones you might need to get checked out.

Back  – The twisting and rotating that goes on during your golf swing can put a lot of stress on your back and for that reason, a little soreness now and then is very normal. In fact, if you’re playing a lot, the chances of you feeling a little bit of tightness in your lower back is pretty high (even if you’re doing everything right).

Sharp pain or stinging sensations aren’t okay. If you feel some uncomfortableness in your back and you don’t think it’s muscular, you may want to see a doctor. These types of pains are often associated with nerve injuries or spinal issues and playing through the agony only makes them worse. The same applies for neck aches and pains as well.

Legs – Although most of the movement during your golf swing occurs from the waist up, your legs have to provide a great deal of support and it’s not uncommon for them to get sore from time to time (even if you ride in a cart). While the most common area you’re likely to feel some tightness is in your hamstrings, soreness can occur anywhere (calves, quads, groin).

Knee pain on the other hand, may be a sign of something a little more serious. Your knees take on a lot of stress in your downswing and the last thing you want is damage to any of your major ligaments. Tiger Woods is living proof that even with a near perfect swing, the pressure put on your knees can be enough to cause major structural damage. If you experience any kind of pain in this area or if you’ve had trouble with your knees in the past, don’t ignore it, see a doctor.

Arms and Shoulders – The most common golf injury when it comes to this part of the body is “tennis elbow” (sometimes referred to as “golfers elbow”). It’s generally caused by repetitive movements and overextension of the elbow and common symptoms include soreness or tenderness on the outside of the elbow. There are a number of remedies available for this condition and in general, it isn’t considered serious.

Beyond that, any type of aching or sharp pains in your shoulders should be checked out by a doctor. Torn rotator cuffs and severe tendonitis aren’t uncommon in golfers and you don’t want to make any issues worse by continuing to put stress on already injured parts of your body.

Last but not least, if you’re ever unsure about something that’s hurting, see a doctor. Don’t assume it will just go away. Be active and take care of your body.